As the remnants of an empire that once covered almost the entire area from Greece to China, Iran is full of historic wonders. Due to the country's current political situation, it is not exactly a top tourist destination and as such many of these wonders are kept a secret from the rest of the world. As with any historical building, the ten sites listed below each contain a rich history within their spaces. However, Iran’s history is exceptionally complex, layered with dynasties and rulers whose influence extended way beyond modern-day Iran. These sites, therefore, are physical memories of the rich culture that underpins Iranian people today, despite the radical change in the country’s political sphere after the 1979 Revolution. Sacred sites for the Zoroastrians, for example, are still visited and remembered, despite the restrictions placed upon them by the Iranian government. The essences of these sites provide opportunities to learn about and empathize with the history of Iran, beyond what we hear in the news. Situated 60 kilometers northeast of Shiraz, Persepolis (literally “the city of Persians” in Greek) was the ceremonial capital of Persia during the Achaemenid Empire around 550-330 BC. The archeological ruins cover a total of 1.6 square kilometers with remnants of enormous columns, two royal palaces and gardens, and what is believed to be the mausoleum of Cyrus the Great. One enters through the Gate of All Nations, where international explorers from hundreds of years ago have carved their names into the walls, now protected by glass barriers. Persepolis’ history is what makes it so powerful, despite the number of tourists that can now be found there. Nagsh-e Rostam necropolis Located around 12 kilometers northwest of Persepolis are enormous monuments carved into the mountains, housing the final resting places of the Achaemenid kings. Unfortunately the tombs were raided by Alexander the Great, however this does not affect the majestic appearance of their exteriors in any way. The sheer size of the the stone carvings are difficult to grasp, let alone the thought of people laboring under the hot sun to produce them.

Pasargadae was the capital of the Achaemenid Empire under Cyrus the Great who had issued its construction (559–530 BC); it was also the location of his tomb. It was a city in ancient Persia, located near the city of Shiraz (in Pasargad County), and is today an archaeological site and one of Iran's UNESCO World Heritage Sites. The one architectural site that shows up in the vast majority of Iran travel guides is a space covered in beautiful blue and yellow mosaics—known as Shah Mosque, but officially renamed Imam Mosque after the 1979 Revolution. It is famous for a reason of course, which is why it’s starting off our list. You could spend an entire day walking around the mosque, taking in its details, finding its hidden secrets. One thing you must not miss is the experience of standing under the center of the main dome, on a small square singled out by the fact that it is made of a different kind of stone. Stand there and speak. The echoes that are created by your voice are indescribable, and that experience is worth a visit in itself. If you get up extra early for one thing in Iran, let it be the Nasir-ol-Molk (or “Pink”) Mosque in Shiraz. Experiencing the quiet room as the sun rises and washes through the coloured glass is a tranquil, humbling experience. Although the room quickly fills up with tourists snapping their cameras, zipping their sweaters and coughing in the dry air, having a few moments to yourself in the early hours of the morning are what makes the Nasir-ol-Molk Mosque worth visiting. It allows one to sense the personal, inner space it was meant to create. If Shiraz seems too far out of reach, you can experience the space through a virtual 360-degree perspective here for the time being. The Golestan Palace is a collection 17 structures in the form of gardens, Iranian craftwork and old royal buildings that were once contained within the "arg" or citadel walls of Tehran. Almost all the structures were built during the Qajar Dynasty, from 1797-1834. Unfortunately, a large number of the buildings were destroyed during the rule of Reza Shah from 1925-1945, due to his belief that the old architecture of the city should not hinder its modern growth. Fahadan neighborhood(the historical city of Yazd) is the oldest neighborhood in Yazd, which is said to be the living place of the lords in the past. Four military leaders in the year 1040, created a fence containing towers and forts around the area. The neighborhood of Fahadan is also significant in terms of location. In the south, Baazar No and Vaght o Saat Square, and in the west Shah Abolqasem tomb and Kooshk-e No are located. Significant buildings are located in this neighborhood aswell, such as the Malekzadeh's house, the tomb of Sheikh Ahmad Fahadan, Fahadan Mosque, Lari's House, Chehel Mehrab Mosque, Saheb al Zaman mosque, Imamzadeh Seyyed Tajeddin (Seyed Penhan), Abolmaali Bath, Alexander's Prison (Zendan-e-Eskandar), Fahadan water storage, Tehrani House, Mahd-e-Quran, Navab Vakil House, Sagha Mosque, Mirzadeh House, Mahmoudi's House, Ghadamgah Mosque, Husseinieh Fahadan, and the oldest historical monument of Yazd, tomb of the 12 Imams which dating back to Seljuk era, that its architecture and brick dome are considered as the masterpieces of those days.

Since 2017, Fahadan neighborhood is recognized as a World Heritage Site by UNESCO. Zoroastrians believed that the dead body would "pollute" the earth if buried in it; in order to combat this problem, they built the Towers of Silence close to the sky, where special caretakers would carry up the dead. In these large and exposed circular spaces, the sun and birds left behind nothing but bones, that were later collected and finally disintegrated by lime and water. The Towers haven’t been used since the 1960s, as the Iranian government has banned this practice. At the bottom of the Towers lie the ruins of a small village, almost entirely camouflaged by the desert. 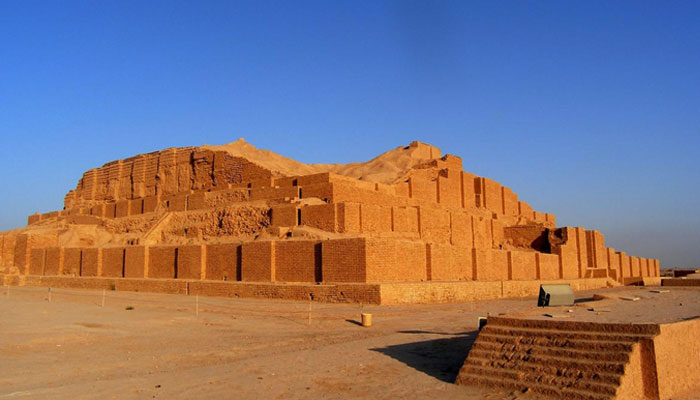 Chogha Zanbil is a historical site in the Khuzestan province, close to Susa (30 km or 19 mi away). It is a temple remained from an ancient city named Dur Untash which dates back to Elamite era, 1250 BC. The temple was about 52 meters high and included 5 floors, but only 2 and half of them remained. Chogha Zanbil was one of the first historical sites in Iran to be recorded in the World Heritage List. Some of the fascinations of this landmark are Elamite writings on 5000 bricks of the temple, the interesting water supply system, and the ancient observatory. This system is an attached complex of water mills, waterfalls, canals, and tunnels in Khuzestan province, in the Shushtar city. I was built and developed for directing the water flow in the Achaemenid, 500 BC, and Sasanid era, 300 BC. Madam Jane Dieulafoy, the French archeologist, refer to this system as the biggest industrial complex before the industrial revolution. If you have decided to visit Chogha Zanbil ziggurat, don’t forget to put this place in your plan too.

9. The Bazaar of Tabriz Is a historical market situated in the city center of Tabriz, Iran. It is one of the oldest bazaars in the Middle East and the largest covered bazaar in the world. It is one of Iran's UNESCO World Heritage Sites. Tabriz has been a place of cultural exchange since antiquity. Its historic bazaar complex is one of the most important commercial centres on the Silk Road. A bazaar has existed on the same site since the early periods of Iranian urbanism following Islam. The bazaar was mentioned by the Venetian traveler Marco Polo, who claimed to have passed through it while journeying on the Silk Road.

The structure consists of several sub-bazaars, such as Amir Bazaar (for gold and jewelry), Mozzafarieh (a carpet bazaar, sorted by knot size and type), shoe bazaar, and many other ones for various goods such as household items. Tabriz and its bazaar were at their most prosperous in the 16th century, when the town became the capital city of the Safavid kingdom. The city lost its status as a capital in the 17th century, but its bazaar has remained important as a commercial and economic center. Although numerous modern shops and malls have been established nowadays, Tabriz Bazaar has remained the economic heart of both the city and northwestern Iran. Golestan Palace- this place has been registered as World Heritage Site in Iran by UNESCO. One can observe its perfect architecture which is a combination of traditional palace and traditional museum architecture. In fact, while you visit Golestan Palace, you should visit Shamsolemare because this place is so beautiful and it has so many fabulous artful works, mirror works and the like; to illustrate, after you visit this palace you can visit the Bazaar. In my opinion, Golestan palace is one of the most beautiful palaces. .Particularly enjoy the hall of mirrors plus the opulence of the later day rulers! Wish you the greatest times during your visit of this marvelous place and historical attraction.