TOP 10 PERSIAN FOODS THAT YOU’VE GOT TO TRY

TOP 10 PERSIAN FOODS THAT YOU’VE GOT TO TRY

From the earliest times Persians have been known for their hospitality, whether that of the tribesman offering rest and refreshment to a weary traveler, or that of the urbane city dweller offering a sumptuous repast to his guests. Tradition requires that guests or visitors be served only the finest food available, and always in the most bountiful manner possible. Accounts of early travelers to Iran indicate that the dishes served have not changed appreciably over the centuries.

Persia’s geography, history and cultural influences have shaped the diversity of ingredients and the methods of cooking in one of the world’s oldest and most sophisticated cultures. Persia – or Iran – has been subjected to repeated invasions, but it has maintained its culture, language and identity throughout the centuries.

The vast size of the country encompasses a wide array of local dialects, lifestyles, regional traditions and customs, not to mention an extraordinary variety of landscapes and climates.

All these are reflected in the country’s food. In the north, around the southern coast of the Caspian Sea, the landscape is lush and green and as a result of plentiful rainfall there is great diversity of fruit, vegetables and herbs.

The northern regional cuisine features simple, fresh notes of taste and aroma, and there is a preference for sweet and sour flavors’, as opposed to spicy. Further south, in the provinces near the Persian Gulf, where the climate is drier, the season for fresh ingredients is much shorter and the variety available is not as great.

There is also a long tradition of trade through the sea routes with spice-rich countries like India. The resulting cuisine is more complex in taste than in the north of the country, with long notes of spices, tamarind and chillies. 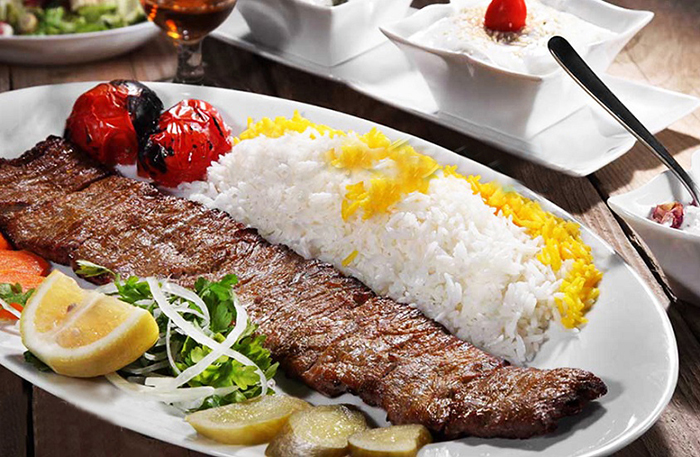 Chelou kabab is an Iranian dish consisting of cooked rice (Chelou) and one of the many varieties of Iranian kabab. It is considered the "national dish" of Iran, and was probably created by the time of the Qajar dynasty. Chelou kebab is served with accompaniments such as butter, Sumak (crane) powder, onions, and grilled tomatoes. The traditional beverage accompanied with chelou kebab is Kola, doogh (an Iranian yogurt-based drink, sometimes made of carbonated water).

In the old bazaar tradition, the rice and accompaniments are served first, immediately followed by the kababs, which are threaded on skewers, as well as a piece of flat bread (typically lavash). A skewer is placed directly on the rice and while holding the kebab down on the rice with the bread, the skewer is quickly pulled out. 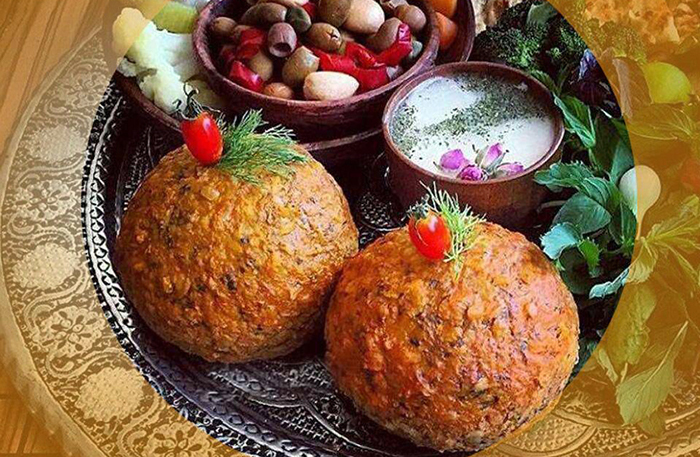 Koofte Tabrizi is very famous in Iran, it originates in Tabriz. Tabriz’s are known to make the best Koofte Tabrizi, because after all when a food is named after your city, it has to be worth that honor! The taste is divine and the texture is incredibly light and moist.

Koofte Tabrizi is a super meatball stuffed with dried fruits and berries, also a variety of nuts.  There are some other interesting fillings for this very traditional Azeri dish that are worth mentioning. One very common item is a peeled hardboiled egg that is placed inside the koofte along with nuts and dried fruit. The yellow cooked yolk surrounded by a ring of white makes a pretty presentation when you cut into the koofte, so you might give this a try if you like.

The other two choices for stuffing are almost unbelievable. Some cooks stuff one whole cooked chicken inside a koofteh.  An even larger stuffing is a whole turkey! The latter koofte can weigh up to 60 plus pounds.

The delicious broth that you see in the picture is mixed with pieces of Sangak or other flat bread and then it is called “Tilit” The koofte has to cook in very little sauce otherwise it will fall apart.  When the koofteh is ready the sauce is reduced to only about a cup or so.  To make enough broth for the Tilit, a thin sauce is made separately and the reduced (thickened) sauce is added to it to create an amazing soup.  When the pieces of bread soak up all of this broth, you will have what is called “Tilit,” with a melt in the mouth texture and an outstanding flavor. 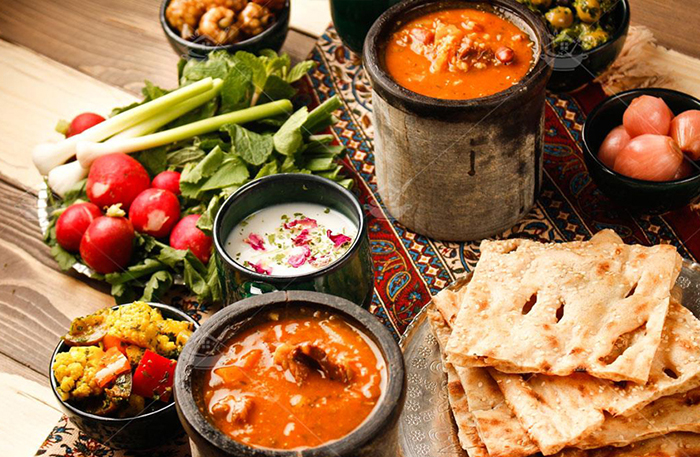 Abgoosht is a one-pot comfort food that is a rustic dish with wholesome ingredients.  This stew has been enjoyed by our Persian ancestors over the centuries and still remains as one of the most popular meals in Persian cuisine. Abgoosht means “meat broth” word by word, but it is so much more! It is a delightful combination of the most tender meat and potatoes plus, vegetables, spices, and legumes. Then there is the broth mixed with pieces of sangak or lavash bread; that is the best part of the “meat broth” called, Tilit. There is yet another very old fashioned stew called, Persian Shorba, which is similarly served with the broth on the side.

Tilit is a soup made with this flavorful broth, tossed with bite-size pieces of Persian flat breads, sangak or lavash.

The bread soaks up the broth and all of its flavor. Tilit is served on the side of Abgoosht and it literally melts in the mouth. The meat and vegetables may be enjoyed whole, or mashed into what is called, goosht-e koobideh which is the traditional way of eating Abgoosht. Goosht-e koobideh is made with a goosht koob, which looks like a meat pounder with a smooth surface.

Abgoosht is a rustic stew made with lamb or beef and chickpeas. You might also enjoy a cup of freshly brewed Persian tea after this wholesome traditional meal for a total Persian experience! 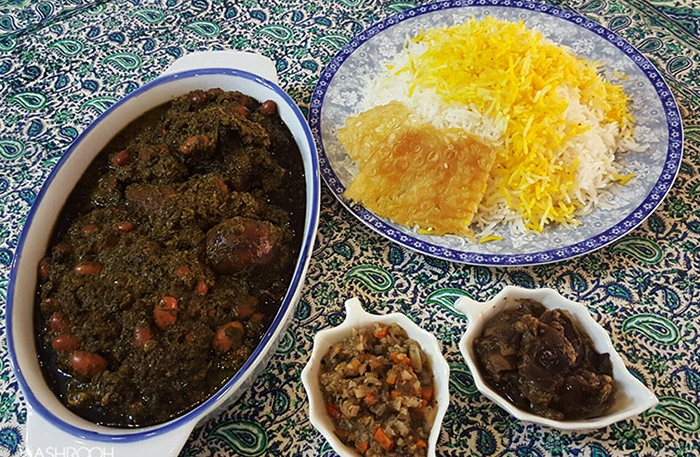 Arguably one of the most beloved stews in Iran, this delicious Persian herb stew is best paired with Persian steamed white rice. This dish is loaded with flavourful herbs (parsley, cilantro, chives and fenugreek) all cooked in one, together with red kidney beans and slow-cooked beef or lamb. Cooking Gormeh Sabzi can be very time-consuming, that’s why it’s more likely you’ll find it in a Persian household – cooked with love by a Persian mom! 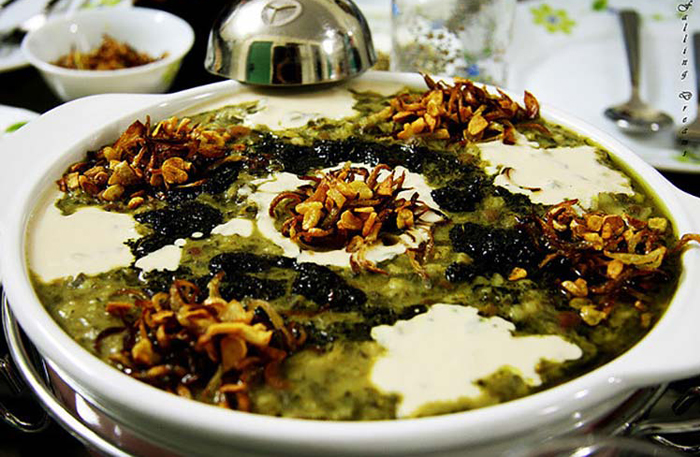 There are so many reasons why you should visit Iran and Ash is definitely one of them. It’s just the perfect comfort dish to eat on the street in the colder months in Iran. This thick vegetable and noodle soup is traditionally prepared to welcome the Persian New Year, and noodles are believed to bring good fortune for the following year. There are many types of ash (soup) but Asheh Reshteh is probably the most common (and tastiest) recipe from Iran. This hearty soup is usually enjoyed with fried onion, garlic, mint mixture and liquid kashk (whey) on top. 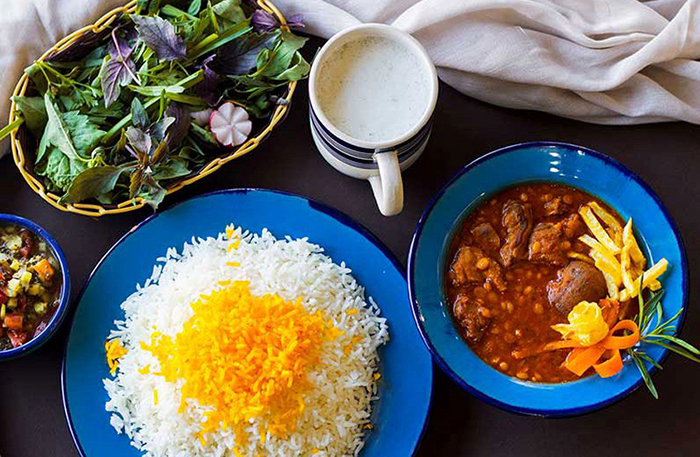 One thing you need to know about Persian cuisine is all kinds of beans are used in their stews. I never liked beans until I tried this traditional stew of meat and yellow split peas, and I have to admit, Persians know how to work their legumes. Limoo Amani (dried lime) plays a big role in the delicious taste of this dish and you can only find it in Iranian grocery stores. Khoresh Gheymeh is usually served with fried potato wedges on top and enjoyed over steamed rice. 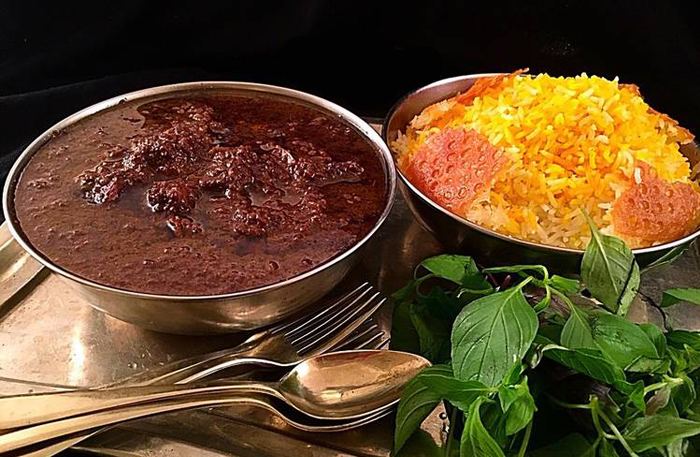 This iconic stew, an essential part of every Persian wedding menu. Khoresht-e fesenjan traditionally made with duck, this dish also works well with chicken or lamb. In the north of Iran it is sometimes made with fish. It is a relatively easy khoresht to make, but it must be cooked slowly to allow the flavours to develop in the sauce. The consistency should be thick and creamy and the colour almost black. The distinctive flavour combines the nutty taste of ground walnuts with the sweet and sour flavour of pomegranate syrup. 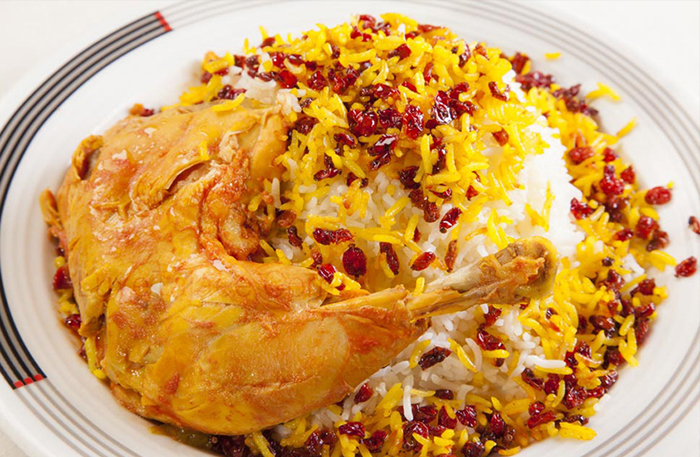 The sweet and sour flavour of zereshk (barberries) and the glistening ruby red berries set against the white and saffron tinged grains make this a feast for the taste buds and the eyes. Zereshk polo is served at weddings and other celebrations because it is impressive and easy to make in large quantities. It is usually served with chicken, but it is also delicious with Saffron yogurt lamb 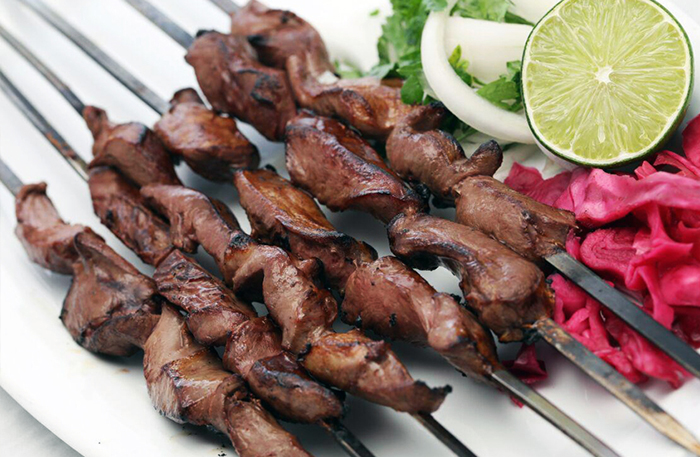 Del, Jigar and Gholve (Heart, Liver and Kidney) kabobs are a popular street food in Iran. Making your way up the winding, mountainous streets of Darband in Tehran, one of the most common cuts of meat that you'll see being skewered in the plethora of eateries is jigar. If you really want to try best Jigar in Tehran we suggest you to go to Bahman sq in Tehran. 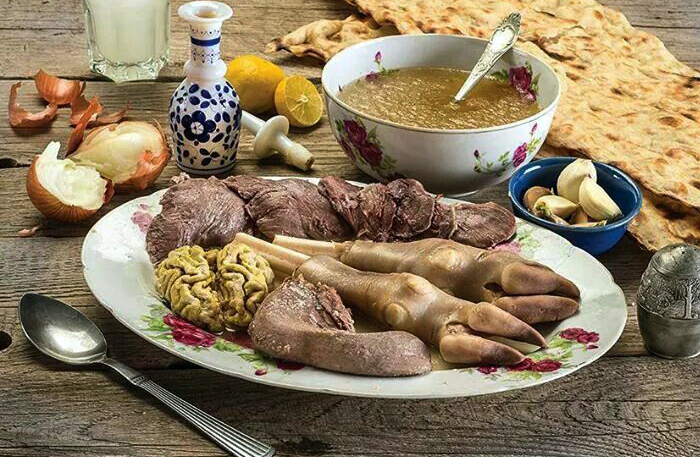 You can not get to know Iranian cuisine without trying “Kalle Pache”, an Iranian classic dish, made with a sheep's entire head and its hooves. Some consider it as an energetic breakfast while others avoid it because of rich amount of cholesterol. Perhaps, firstly it seems a bit frightening when different parts of sheep's head including brain, eyes and tongue are served in your plate. But the taste of it which is seasoned with lemon and cinnamon may change your former perception. Cooking Kalle Pache seems so easy. Just collect the heads and feet of sheep and then mash, cook and treat as per the recipe. However, it is not as simple as it looks. Kalle pache , in most restaurants, is served from 3 am until midnight.